Gene therapies in development have the potential to help all children with Duchenne, and Columbus Children’s Hospital is on the cutting edge of gene therapy trials with their current trial of Follistatin for Duchenne.  Another very promising treatment is Galgt2. Researchers Dr. Paul Martin and Dr. Kevin Flannigan are designing a trial of Galgt2 in humans.  Dr. Martin writes, “The Overexpression of Galgt2 in the skeletal muscles of transgenic mice inhibits the development of muscular dystrophy…Galgt2 may inhibit the development of muscle pathology in mdx animals…Muscles showed a marked improvement in normalized isometric force during repetitive eccentric contractions…[Also] muscles from Galgt2 transgenic mice showed a significant decrement in normalized specific force and in hind limb and forelimb grip strength at some ages.”  $25,000

As gene therapies become viable treatments, one concern is that doctors will not be able to do more than one dose because the body develops an immune response to the viral vector. For that reason, it is important that doctors will be able to modulate that response. Dr. Keith Foster, at the University of Reading in England has been working a strategy to control immune response. Dr. Foster writes,  “…Analysis shows that we have generated novel myeloid precursor cells (MPCs) that have all the hallmarks of being cells with positive immunomodulatory properties; namely the ability to migrate out from the vasculature to sites of inflammation and damage (supplementary figure 1c) and to potentiate the legacy of long term immune tolerance via the induction and/or expansion of a resident Treg population through appropriate cytokine production…These isolated MPCs could dampen the profound dysregulated inflammation in DMD by suppressing activated T cells, and can be manipulated to specifically present antigen such that the generation of in vivo immune tolerance to AAV capsid proteins has great potential.” $25,000

Every Duchenne parent is aware that the only approved medications for Duchenne are corticosteroids.  While a steroid keeps a child on his feet for a few extra years, the side effects are awful. They include weight gain, loss of bone density, and cataracts. Researcher Dr. Eric Hoffman’s new drug, VBP-15 may provide all the benefits of steroids without the side effects. Dr. Hoffman writes that VBP-15 is “an oral drug with mechanisms that provide efficacy through anti-inflammatory signaling and membrane-stabilizing pathways, independent of hormonal or immunosuppressive effects…VBP15 protects and promotes efficient repair of skeletal muscle cells upon laser injury, in opposition to prednisolone. Potent inhibition of NF-?B is mediated through protein interactions of the glucocorticoid receptor, however VBP15 shows significantly reduced hormonal receptor transcriptional activity. The translation of these drug mechanisms into DMD model mice improves muscle strength, live-imaging and pathology through both preventive and post-onset intervention regimens.”  $5,000 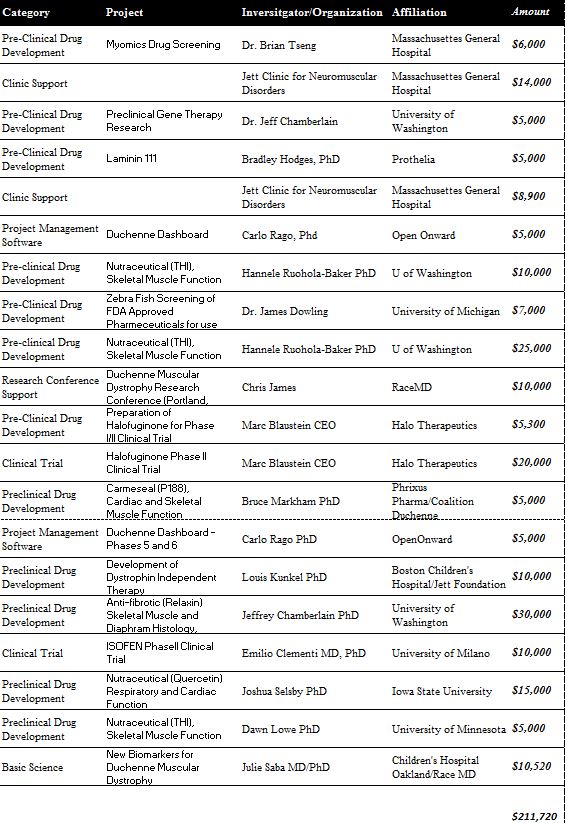 Hope for Gus is a 501c3.
Our 990 is posted annually on sites like Charity Navigator.

How You Can Help

Hope for Gus is happy to support this promising research and so proud of the Duchenne Alliance for working together to make this happen!