Following is a letter I wrote to thank the Souhegan High School Football team and the communities of Amherst and Mont Vernon for a successful fundraiser:

I am writing in response to the Souhegan Saber football team’s game on October 7th that served as a fund-raiser for the Hope for Gus Foundation. It’s nearly impossible to express the feelings I have for my son Gus, who was diagnosed with Duchenne Muscular Dystrophy (DMD), two years ago.  DMD is currently considered a terminal illness – it is the worst form of muscular dystrophy.  The diagnosis means that Gus will be confined to a wheelchair before his adolescence, and eventually lose his ability to breathe on his own. Boys with DMD typically die of heart failure in their mid-twenties.  It is hard to resolve that reality when spending time with six year old Gus today.  He is vibrant and alive, full of the sort energy and love of life that only young children can have.

How does a father understand and accept such a diagnosis?  The only wisdom I have gained in the two years since Gus’ was diagnosed is that I cannot do it alone – and yet, as a teacher, I have tried to keep it separate from my students. Somehow admitting that level of vulnerability seemed too much.  Yet I have learned that when your child has a terminal illness, that vulnerability is there for all to see. 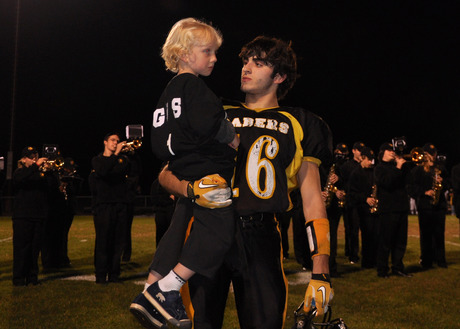 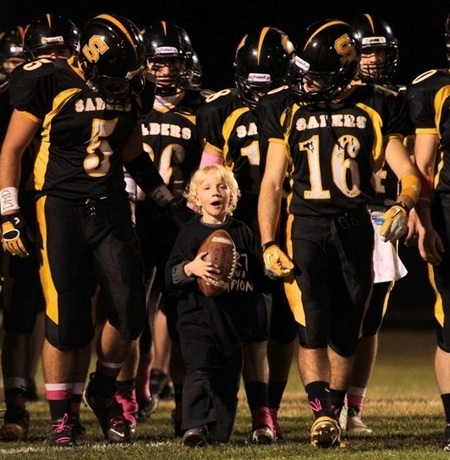 Last spring Mike Beliveau, Souhegan’s football coach approached me and asked me if his team could sponsor a fundraising event for our foundation, Hope for Gus.   I agreed, knowing it would require my public acknowledgement of this diagnosis and that I would have to expose Gus’ and my vulnerability. This fall, Mike and I spoke with students in each grade level during an Advisory period about DMD and the fundraiser. Students were quiet and respectful – some were visibly moved by Gus’ story. Peter Warburton, our school’s Superintendent attended one of the presentations. Students embraced the fundraising opportunity.  One student, expressing what I have come to think of as ‘the spirit of Souhegan,’ said, “We have to help Gus – he’s part of our family.”

The Spirit of Souhegan –  rooted in the communities of Amherst and Mont Vernon –  was on full display in the week leading up to the fundraiser. Students approached me in the hall to say that they were happy to have something really good to work for. Through advisory, they gathered pledges for each touchdown our Saber’s would score against Pembroke Academy’s Spartans. They bought tee-shirts and contributed spare change. They attended the game in record numbers.

I have so many impressions from the evening of the game. In the locker room before the game, Coach Beliveau handed me a check from the Pembroke team for $175.00, underscoring the spirit of sportsmanship. He told his players that by raising awareness and money, the team had already ‘won.’  The team presented Gus with a ball signed by all its members and a t-shirt that said “Heart of a Champion.”  Students lined the path applauding wildly as team captain Chris Chinnis carried Gus with the team out to the field.  As the starters were being announced, someone asked Gus if he wanted to be carried or if he wanted to run with them onto the field.  He said, “I want to walk.”  Without pause, the young men shouted, “We’re walking tonight – walking with Gus!”  Gus went out with the captains for the coin toss, called it and won! During half-time, the team stood with Gus as the Harte family generously presented Gus with a football signed by Patriot’s quarterback Tom Brady.

The pledges are still being counted, but as of this writing, the Sabers’ seven touchdowns have raised close to $8000.00 for the Hope for Gus Foundation. As a fundraiser, I am grateful for money that will have an important, immediate, and direct application in exciting research.  As I told my students, researchers are close to figuring this disease out – the money that we raised really matters.  As a dad, I am proud of my son for inspiring our students.  But I am writing this letter as a member of the Souhegan community and a teacher of students in Amherst and Mont Vernon. I am writing to share with the general public the knowledge that this community is filled with a sense of wanting to participate in the greater good. This community of students, staff, administrators, and parents truly want to change the future. This school community is caring and compassionate. Through the leadership of the Souhegan Saber football team, we all participated in paying it forward and providing hope. My family and I are deeply touched by your generosity of spirit.

How You Can Help

Hope for Gus is happy to support this promising research and so proud of the Duchenne Alliance for working together to make this happen!